In the last two decades, scholarship about magic has thrived; however, in the midst of everything, there has been little focus on the material aspect of magic. In particular, what is the relationship between the person and the material? What role does the material play in magic?  Rather than approaching “the social, intellectual or philological side of magic” (9), the volume engages primarily with the material approach, the product of a conference in Cologne in May 2012. While many of the articles contribute to these three approaches (social, intellectual and philological), the primal approach in this volume is the materiality of magic.

Needless to say, magic is a debated term and concept. So, each articles offers fresh insights on how we should define magic and continues with valuable discussion of historical periods ranging from ancient Egypt to the post-Medieval era. Jan N. Bremmer kicks off by 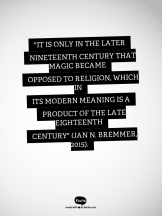 providing a the basic goal of the volume and a succinct consideration of defining magic, namely a goal of a material approach to magic and magic as a fuzzy concept understood differently based on the circumstances. Although there is nothing particularly new or innovative about the preface, it is helpful for readers who may be unaware what it is to approach magic in terms of materiality. Simply put, Bremmer’s preface is an excellent primer before engaging with the material.

Jacco Dielman sketches the history of textual amulets in pharaonic Egypt and focuses on the relationship between the material utilized and how that material affected the amulet’s format and handling. Beyond the sketch of history, he highlights how the materials used for amulets developed. One major result of his contribution is the foundation “results of a larger project on the history of textual amulets in antiquity” (23). In will be interesting to see in the future how his analyses in this volume stand up to scrutiny of future research in his large project.

Focusing on how miniature monstrous figures attain ritual efficacy, Laura Feldt argues they were installed as media who were both in this world and the other world, bringing bless and cursing. As materials, they embodied this fundamentally ambiguous state only effective as material. Feldt writes, “The ‘reality’,  functions, and importance attributed to transempirical beings in religion and magic depend fundamentally on mediation and materiality” (90). This mode of ritualizing the monstrous figures and providing it efficacy is important because, by focusing on the production of magic materials for pragmatic ends in material and textual sources, it becomes apparent that the satues attained efficacy from broader discussions about ritual efficacy, statue use, and divine presence. I do look forward to considering how Feldt’s push for understanding monsters as liminal beings, on the borders of our world and the other, modes for blessing and cursing, may have ripples in Biblical Studies.

Jaime Curbera provides update analysis on the material aspects of Richard Wunsch’s collection of Greek curse tablets. Naturally, these observations improve our understanding(s) of the nature of “magic” in ancient Greek culture. Of particular importance is the appendix, which provides new readings of some of the tablets within the collection.

Jaime Curberaq and Sergion Giannobile together issue analysis of a newly published Voodoo doll, suggesting that it originated in Keos. This is followed by a lead isotope analysis which confirms the possibility of origins in Keos.

Richard L. Gordon argues for a more intimate associations between the material and immaterial in magic by examining how magical substances, namely natural substances, manufactured objects, and text, shifted from being materials to immaterial ideas.

Veronique Dasen provides an overview of several amulets in order to demonstrate how differing period thought about amulets as material magic. Consequently, she provides important considerations of how magic and amulets developed, along with the role of the the amulets. These considerations are important because, from a methodological perspective, it highlights the importance of reflecting on material magic from an emic, internal perspective, taking consideration of the developments and influences which change how people understand materials.

Arpad M. Nagy first provides an overview of magical gems in the Roman Imperial Period. Following his discussion, he highlights a gem that stands on the threshold between two cultures, constituting a creative connection of different cultures. Because it was a product of cross-culture, it failed as a magical gem. Importantly, Nagy’s awareness of the diversity of the gems is important because it helps to re-define the genre and demonstrate the significance of magical during the period.

Jan N. Bremmer focuses on three points in his contribution: (1) a brief history of books with magic in antiquity, (2) an emic argument for the lack of any magical book, and (3) an etic argument for the Bible as a magical book in late antiquity. One thing Bremmer directly touches upon that other contributions do not is a keen awareness of the struggle between emic and etic descriptions when it comes to understanding magic. His comment on the Bible in particular demonstrates this awareness: “From an etic point of view, the uses of a Gospel or the Bible discussed above might be considered as magical. On the other hand, these books certainly were not grimoires, and neither did most Christians consider them as magical…” (269). I commend Bremmer for this astute comment.

Jitse Dijkstra concentrates on six Greek magic texts with Christian elements. With these magical texts, he demonstrates the syncretistic environment of Egypt in Late Antiquity. He does so by examining the relationship between the image on the magic texts and the texts themselves. From a historical perspective, his work is important because it enables a more nuanced examination of how the images within texts can enable cross-cultural examination of ancient cultures.

Jürgen Blänsdorf analyzes the curses texts of nymphaeum in order to consider the defixion texts and magical components in relation to Tabulae Sethianae and the Anna Perenna sanctuary. By highlighting the similar and differing elements, he clarifies and sharpens our current understanding of the texts geographically and in terms of material magic.

Peter J. Forshaw’s analysis of Marsilio Ficicono through Heinrich Khunrath draws out the materials aspects, and developments therein, of astral and talismanic magic and the relation between between the user and material. I found Forshaw’s comment on the blessing of the high priest particularly fascinating: “Bearing in mind Khunrath’s interest in both Christian Cabala and Divine Magic, it is little surprise to discover that the very same verses can be found on Jewish ritual amulets” (372). I find this intriguing because in Jeremy Smoak’s recent work on the Priestly blessing, one of his primary arguments is that the benediction is apotropaic in origins. Perhaps, then, Khunrath was onto something when  he used the text as a amuletic formulation.

Owen Davies explores the material culture of post-Medieval domestic magic and highlights the emotional connection between the material of domestic magic and those who provide it agency. While discussing methodological approaches to this topic, one exceedingly insightful comment, and perhaps a call to act, considers the current nature of “magic” within different disciples: “It should go without saying that different disciplines have much to learn from each other’s source base, theories, and methodologies when it comes to understanding ritual activity and magic. But while there are numerous different conversations going on, they are rarely shared because of disciplinary, chronological, and geographical boundaries between scholarly communities and individuals” (380).

As evident through the great variety of time period, The Materiality of Magic offers a plethora of conclusions through the common focus on material aspects of magic. Because it draws from so many time periods, it offers a variety of authoritative, influential, and important ideas of how scholars understand “magic”. Although it may not have been available, the volume would be strengthened substantially with an additional article about the materiality of magic in the 21st century.

Overall, I highly recommend this work. The contributions, derived from a diverse group of scholars and disciplines, are important starting points, or perhaps checkpoints, for current dialogue regarding magic. Variations of what constitutes “magic” in terms of materiality for each contributor, depending on his or her scholarly tradition and studied historical period, reflects the past and forthcoming struggles about understanding a term with such baggage. Yet, The Materiality of Magic is an excellent start in breaking disciplinary walls and secluded scholarly approaches.

*I’d like to express my gratitude to the publisher who provided me a review copy in exchange for my honest opinion.