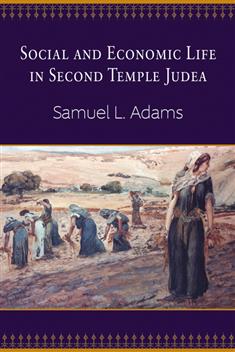 Samuel L. Adams (Associate Professor of Biblical Studies at Union Presbyterian Seminary) provides a readable analysis and presentation of social and economic life in Second Temple Judea. Rather than purely being a history of the socio-economic conditions in the period, Adams’ work funnels towards how solid economic understandings allow for better biblical interpretation. According to Adams, “no previous study has focused specifically on economic when analyzing this time frame” (2). While there has been no survey of this period that explicitly connects economic conditions and theologies, there has been much work on the economic conditions during Roman, Seleucid, Ptolemaic, and Persian periods . Thus, his claim to uniqueness is true in some sense, but overblown some regards.

Chapter 1 highlights the household structure and their struggles, such as imperial demands through taxation, financial aspects of marriage, and a generalized snapshots of household life. Following, Chapter 2 explores the roles and responsibilities of woman and children, emphasizing that while both were often marginalized and socially vulnerable, “the roles they played in facilitating economic life” were “indispensable contributions at the household level and beyond” (81). Chapter 3 focuses on two major elements of daily life in the 2nd Temple Period – work and financial exchanges – and demonstrates the difficulty of daily subsistence and common occurrences of elites exploiting the lower class through surety, loans, and bribery. Chapter 4 provides a diachronic view of the historical periods of Judea’s subjection to leadership by Persians, Ptolemaics, Seleucids, Hasmoneans, and Romans. Finally, Chapter 5 examines the Second Temple Period literature directly and demonstrates the diversity in opinions regarding the ethics of wealth and poverty.

One of the most important things about Adams’ book is how his economic analysis allows more layers and elements by which to critique biblical literature. Although many have done this previously, Adams’ effectively summarizes the large amounts of scholarship regarding economics in the period and demonstrates how they elucidate biblical literature written during the 2nd Temple Period. Yet his success was also a shortcoming: the focus on biblical literature (roughly 65% biblical literature, 35% other sources) does not provide a full picture. Especially from the Hellenistic and Roman periods, there is a large amount of data from which he could have drawn. For example, when one considers how interrelated economics and philosophy were, and arguably still are, a lacuna of Hellenistic influence upon how various authors address economic issues becomes apparent. One of the most notable places where this is needed is within his final chapter, which explicitly examines the ethics of wealth and poverty within Second Temple Period literature. How did various philosophical schools impact ideas about these ethics? How did the climate of Judea impact these ideas? Rather than narrow focus and assumption of theological autonomy, potential external influences must be considered. For such a small region, external influences, both philosophical and geographical, are extremely important to engage with, as they played a major role in shaping the social and economic life in Second Temple Period Judea.

Additionally, although he claims to be covering the 2nd Temple Period, some sources from which he draws are not relevant to his discussion. Even if they are relevant, he does not demonstrates why something outside of 586 BCE to 70 AD is still relevant to his study. He notes in the introduction, for example, that “many of the New Testament books postdate the destruction of the temple in 70 CE, and yet these sources are helpful for understanding economic life in Judea under the Romans” (7). He needs to demonstrate through critical analysis why it is still relevant. Likewise, in order to justify elucidation of Jerusalem’s economic landscape through Elephantine papyri, he notes that “some have questioned the relevance of an Egyptian settlement for understand the socio-economic landscape of Jerusalem and its environs, but such a rigid position is dismissive of vital evidence for family life during this period” (31). Adams continues with no evidence of why it is relevant and does not work to justify its relevance. Questioning the use of Elephantine papyri is not dismissive; rather, it demands reason to associate distinct social and geographical spheres of existence. In Chapter 2, he continues with use of the Bavli, a document fully compiled in the 8th century AD and far outside the Second Temple Period (71, 86). As  demonstrated, he sometimes draws on sources that are not fully relevant to his argument. Even if they have potential to be relevant, he does not justify his use of them.

Third of all, the organization of the book is inconvenient for the reader. Although there are consistent references to the various imperial rulers in Chapters 1-3, he waits until Chapter 4 to provide a history of taxation and the role of empires in Judaean socio-economics. In order to fully understand the daily life of families, woman, children, work, and financial exchanges, Adams should have began with diachronic presentation of taxation(s) and the role of the state(s), as it would have provided a framework by which to understand various elements. Chapter 1, for example, lacks clarity because he bounces back-and-forth between various imperial periods, causing confusion for the reader.

Finally, Adams disagrees with his own arguments at points. In the conclusion, he writes that within Second Temple Period framework, “it becomes inadvisable to speak of the “religious” aspects of a particular passage or development, as opposed to “economic” or “cultural” factors. These are false distinctions when examining this period” (207). Yet in his own arguments, he agrees with Tcherikover that “military efforts by the Hasmoneans had economic motivations at their core rather than religious ones” (170). Rather than writing about the distinctions within the conclusion, they should be established as methodological foundations. Unfortunately, his failure to do so demonstrates an inconsistency within his thinking, which he should address for a more coherent argument.

As is evident, I was not a huge fan of this book, though I won’t dismiss its value. I greatly appreciated the broad overview of family life during the period and his ability to summarize vast amounts of research. Adams’ vision is fantastic and makes me look forward to his commentary on Ben Sirach; however, the inconsistencies take away from the overall value of his work. Again towards a more positive spin, as Peter Altmann has noted about his work, Adams’ provides a good survey with many places in which future research may take place [1]. If someone is doing work on the social and economic life of Judea, this is a great place to begin, so long as caution is taken to recognize the shortcomings of the book.

[1] Altmann notes the following in his review: “While one may quibble over many details, as a volume that provides a worthy introduction to the subfield of economics in ancient Judea, some basic definitions and discussion of his approach to ancient economics would be helpful”. 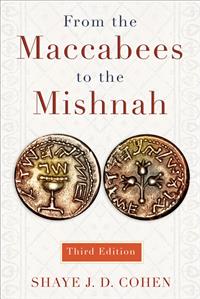 *I would like to express my gratitude to Westminster John Knox Press for providing me with a review copy in exchange for my honest opinion. Additionally, because the first edition was published in 1987, I will primarily focus on the newest additions, rather than repeat any old critiques.

Shaye Cohen’s third edition of his work about Jewish life from the Maccabees to the Mishnah is most valuable as an overview. Oddly enough, he offers the most poignant critiques in his third edition preface, writing that sometimes he “speaks about “jews”… where [he] would now be more careful and write “Judeans” ” (xi). He goes so far as to say that if he were to rewrite the book, “there would be no end” (xi).

It is divided into eight chapters. Chapter One discusses important terms for historians studying this period and provides succinct summary of the exile to the formation of the Talmud Bavli. Chapter Two engages with the relationship between Jews and gentiles through the major rebellions and wars, Hellenistic cultural influence upon Jews, and social spheres of interaction. Chapter Three presents the Jewish religious praxis and belief. Following, he disseminates the Jewish communal institutions. Chapter Five moves closer towards addressing Christianity through discussion of the sectarian and normative Judaism. Chapter Six explore the development of the Jewish canon and how the developments impacted the transition to Rabbinic Judaism. Chapter Seven, thus, explores how Rabbinic Judaism emerged. Finally, Chapter Eight, the new addition to his work, argues that limited interactions between Jewish and Christian communities contributed more a “parting of ways” than any major event that caused a rift.

One challenge Cohen faces is the focus on history and theology therein. As a historian, Cohen recognizes his limitations. It is for this reason, though, that I greatly appreciate his work. He is capable of producing an entry level book that demonstrates proper historical analysis of theological and life developments. Even as a Third Edition, his analysis is still important because it allows students and lay people to engage with trends in scholarship. I do, though, wish there were more footnotes. While there is an appendix of suggestions for further reading, the inexperienced person may find difficulty in actually exploring specific areas of interest from his work. Perhaps footnotes with chapter or page references would correct this minor issue and help people to further explore scholarship.

A greater issue with his work is that, although it is valuable as a basic entry level work into ancient Judea, there is some out of date information. This is problematic because the information is implicitly scholarly consensus. Essentially, inexperienced or uncritical readers will not recognize certain elements and begin to assume that they are relevant to current scholarly trends. I turn to two examples to demonstrate. First, as mentioned previously, Cohen consistently references “Jews” rather than “Judeans”. Realistically most readers will not read the Third Edition Preface in which Cohen explicitly notes that he should have used the term “Judean”. So the average reader will likely follow after the book and continues using the term “Jew”, when “Judean” is a far more accurate term. Secondly, his discussion of the Zadokite priests is outdated, as his historical presentation assumes their existence as a historical reality. In the recent monograph entitled Priestly Rule: Polemic and Biblical Interpretation in Ezekiel 44(De Gruyter, 2015), Nathan MacDonald’s analysis of various texts connected to Zadok validates the current trend of skepticism surrounding the existence of a historical group of the Sons of Zadok or Zadokite priesthood. Succinctly put, “the fact that we find no other references to the sons of Zadok means that we lack the evidence for the Zadokites of scholarly theory, a distinguishable group of priests that claimed physical descent from Zadok” (MacDonald 2015, 145; see also Alice Hunt, Missing Priests: The Zadokites in Tradition and History, 2006). The two previous example are representative of smaller details that the inexperienced reader could take to be scholarly consensus.

With regard to the newest addition, Chapter Eight on the parting of ways of Jews and Christians, it is a valuable contribution as it makes available Cohen’s recent argument from his 2013 chapter about the relationship between Judaism and Christianity in the 1st century CE (Partings: How Judaism and Christianity Became Two, edited by Hershel Shanks, 2013). Overall, that is the greatest benefit of the Third Edition.

Especially for introductory courses on Judaism, Cohen’s work is an excellent addition. With the exception of more nuanced details, the framework which he provides allows readers to engage with ancient Judaism on its own terms from a historical perspective.