Although it won’t be released for a few months, I am excited to read Ilan Peled’s Masculinities and Third Gender: The Origins and Nature of an Institutionalized Gender Otherness in the Ancient Near East. It will be published by Ugarit-Verlag. After reviewing Goddesses in Context, I look forward to how Peled will contribute to our understanding of gender and sexuality in the ancient Near East.

In a comprehensive overview of cuneiform lexical lists (See , “What is a Lexical List“), Niek Veldhuis (Ph.D. Rijksuniversiteit Groningen, 1997; Professor of Assyriology at the University of California, Berkley) traces the developments within the lists from the Archaic Lexical corpus up to the Late Babylonian period. Simply put, he traces lexical lists as knowledge, which he analyzes as “a social phenomenon, as something that people use to pursue their material, social, and cultural goals, embedded in a historical context” (6). Thus, through his work he draws out how shifts and developments in the cuneiform lexical list corpora reflect social-historical conditions.

Chapter One introduces the basic framework standard to any academic work: trajectory, introduction to the topic, history of research, and resources. Chapter Two analyzes archaic lexical lists and, after arguing against their purposes as world order or teaching tools, explains the standardization and transmission of the corpus as construction of scribal identity through a constantly changing environment. Struggling with a broad geographical spectrum of data and lack of regional consistency in the All-Babylonian, Regional, and Local traditions, Chapter Three concludes that third millennium lexical texts do not provide enough data to fully contextualize knowledge within its own context. Shifting to a period in which significant develops were made, Chapter Four analyzes the Old Babylonian (or Amorite) period’s geography and nature of lexical texts in order to provide a theoretical Old Babylonian scribal curriculum, three major uses of lexical lists (scribal curriculum; scholarly handbooks), and to emphasize the precedent of long term effects of the writing revolution.  Distinguishing between the Middle Assyrian and the International Period, Chapter Five explores how lexical traditions in the International Period were appropriated with local variations through international relations, textual traditions, and scribal teachers. Shifting to the Middle Assyrian Period, Chapter Six examines the fundamental changes to the cuneiform lexical corpus, namely the value of the tablet over the scribal community, and their role in establishing and defining stakes regarding the power and legitimization of Neo-Assyrian dynasties. By the Neo- and Late Babylonian periods, lexical texts are no longer the locus of intellectual creativity, Chapter Seven argues, but a tool is scribal school curriculum to further the study and development of texts like celestial sciences and horoscopy. Finally, Chapter Eight synthesizes the information and succinctly summarizes the lexical traditions in regard to three categories: writing, knowledge, and power, categories which allow lexical texts to “sing their own little part as one voice in a choir” (429).

Study of lexical texts is an incredibly specialized field of Assyriology, a point Veldhuis recognizes and emphasizes. For that reason, his contribution to Assyriology is extremely valuable because, for him, the lexical corpus is merely one voice in a choir of voices. His study states the purpose of being a starting point for more nuanced studies of different periods of history that utilize the full range of over-specialized fields within Assyriology. Rather than falling into glorifying his area of extreme specialization, he encourages scholars to synthesize specialized fields.

Although his study did not focus on or even mention biblical literature, it provides an important framework for broadly understanding the scribal community and role of scribes during the range of ancient Israelite existence. While specific points of relations may be difficult to construct, if not impossible, it does help to contextualize certain practices and records within ancient Israelite historiography and folkloric traditions. Needless to say I look forward to how biblical scholars contextualize ancient Israelite scribal communities and praxis in light of Veldhuis’ expansive analysis of 4,000 years of lexical lists.

In conclusion, I highly recommend this work as a reference source. Most people will not read through it, as I did; however, any research regarding scribal communities or reconstruction of certain regions in history should interact with the analyses by Veldhuis. 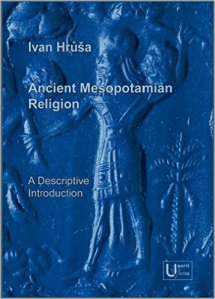 Organization of the book is simple. First, he provides descriptions and dates of various periods of Mesopotamian history to establish a more tangible historical framework of reference. Chapter 1 proceeds with brief summary of important elements in the ancient concept of divinity: division of the gods and goddesses, henotheistic tendencies (and of course polytheistic), and the importance of m e in ancient Mesopotamia. Chapter 2 discusses the principle deities and provides reference to their most significant mythologies. Chapter 3 presents the socio-religious role of the Temple and gods in the Temple, along with the personnel who work in the various cults. Chapter 4 expands upon the issue of Temple and reviews the various ritual and calendar elements necessary for cult worship. Chapter 5 covers the different types of prayers and hymns in ancient Mesopotamian literature, while Chapter 6 engages more so with rituals and incantations, integral aspects to ancient Mesopotamian religion. Finally, Chapter 7 focuses solely on divination as “the discipline which seeks to gain knowledge of the future or of the divine world by means of observation and interpretation of phenomena in the material world or in the personal perception” (153).

Overall, his descriptive introduction is exquisitely written and translated and holds potential to be integral for any classroom on or student of ancient Near Eastern civilizations. Here we will explore a few highlights from his work. First of all, the skill with which he writes is excellent because he essentially compresses an expansive, complex, and dynamic regional and literary history into a brief, succinct, and concise description. So, the reader is able to quickly note how distinct ancient Mesopotamian religion is from modern conceptions of religion. For example, in introducing the ancient concept of m e, Hrůša provides a relatively extensive semantic range list of what m e actually implies. By not appealing to modern tendencies of clear, concise definitions and terms, his ability to stay true to the wide range of meanings within ancient Mesopotamian religion helps to place to reader within the ancient world.

Secondly, although it would have been helpful were the point fleshed out more, he does well in noting that “our distinction between “prayer” and “incantation” is not valid: intercession to the god [prayer] and magical manipulation were complementary since the most important gods themselves (Ea, Marduk) were masters of incantations and magic rituals, and leant efficacy to the magic rituals performed by human beings” (86-87). Because our vision of ancient Mesopotamia is often clouded by modern conceptions of religion, even by our redescriptive use of “religion” for ancient Mesopotamia, Hrůša’s note is important to  the reader. Without it, many inexperienced readers would quickly assume a strong distinction between “incantation” and “prayer”. That said, he should have spent more time discussing the issue within Chapter 1 (“Concept of divinity in Mesopotamia”) so as to provide a snapshot of the complementary nature of the two ideas as a foundation to the whole introduction. Perhaps a general introduction to the cognitive environment of ancient Mesopotamia would have been helpful as well.

Third, regarding Chapter 2’s introduction of principal divinities, Hrůša references major mythologies relevant to each. It would have been helpful, though, if he’d also included references to important and major divination and prayer texts. Although mythologies are without a doubt integral to Mesopotamian religion, inclusion of major prayer and divination texts would provide a valuable direction for students to proceed for their own studies. To counter-balance this critique, though, each chapter does contain a topical bibliography including both classic studies and most recent treatments of the topics.

*I’d like to express my gratitude to Ugarit-Verlag for providing a review copy in exchange for my honest opinion.