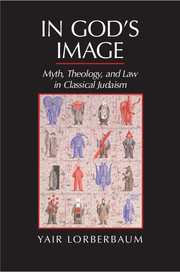 Yair Lorberbaum (Faculty of Law at Bar-Ilan University) completed his doctoral dissertation in 2004, titled Zelem Elohim: Halakhah ve-Aggadah (Hebrew). His current work In God’s Image is an abridged translation of his dissertation, making his work accessible to a wider range of readers. Essentially Lorberbaum argues that man’s creation in the divine image as an eikon of God is fundamental to  and a linchpin for R. Akiva’s teachings and much within Rabbinic Judaism.

Chapters One through Four provide the methodological foundations and Chapters Five through Nine analyze the literature on hand.

Chapter One draws out shortcomings with Jewish interpretations of anthropomorphism and illustrates to necessity to take more seriously the connect between anthropomorphism and Imago Dei. Having offered critiques of anthropomorphism as understood in much Talmudic Scholarship, Chapter Two provides framework for Imago Dei by introducing the importance of image and presence in antiquity, and thereby Rabbinic Judaism. Chapter Three argues to include the tannaitic conception of Imago Dei with both halakhah and aggadah, two generally disparate areas of Rabbinic Literature, and establishes the primary thesis that Imago Dei is a decisive, important halakhic principle. So, Chapter Four concludes the methodology portion by providing functional definitions of myth, theosophy, and theurgy.

Lorberbaum then begins his analysis by demonstrating how tannaitic halakhah’ s four modes of judicial execution tends to preserve the body and avoid its mutilation, indicative of Imago Dei as a principle for law. Chapter Six expands on the halakhah and draws out the paradoxical nature of the execution of Imago Dei, for when a man is killed as a judgement for murder an eikon of God is being killed. Chapter Seven explores the negative theurgical dimensions of capital punishment in which the death of any zelem Elohim diminishes God. Transitioning to preventative theurgy dimensions, Lorberbaum demonstrates that even procreation is preventative theurgy because it augments God through more images. Finally, Chapter Nine briefly illustrates how Rabbinic Judaism’s foundation of Imago Dei was heavily influenced by the destruction of the Temple and transfer of holiness from the Temple to the human, something also visible in concurrent religious trends in antiquity.

Before offering thoughts, we should first note that the Hebrew edition of his book, Zelem Elohim: Halakhah ve-Aggadah (2004), received the Goldstein-Goren Prize for best book in Jewish through for 2004-2007. Thus, there are no doubts that the work is excellent. So we will look at it from two perspectives.

First of all, from an academic perspective, I appreciated his ability to clearly illustrate such a fundamental, yet somewhat illusive, idea as the linchpin of Imago Dei in tannaitic literature. Because Imago Dei is not necessarily directly present, on his part, it took a keen eye to peel through the layers of Rabbinic exegesis. Importantly, his work sets a foundation for future considerations of theology in antiquity. Specifically, it would be intriguing to compare the nuances of Imago Dei in post-Temple destruction New Testament and Christian literature and early Rabbinic principles of Imago Dei. Additionally, it provides a potential framework by which to interpret New Testament literature. As he notes, his research “offers new directions in the research of the subjects mentioned above and… raises new problems and subjects for discussion in research” (278).

Second, from a more personal, spiritual perspective, it brings me to greater admiration for Jewish thought. The value of the human life and soul within Rabbinic literature is beautiful and truly all-encompassing. Regardless of the person, one is zelem elohim if they are human. And because this idea is a foundation in Jewish thought, it makes me admire the traditions even more. Likewise, the theurgy dimensions Lorberbaum considers are extremely intriguing, noting an active role of humans in the divine economy. This important because it allows humanity to be more than a passive worshiper, but to be an active participant. Both of these ideas, even more so the former, are extremely valuable and should be considered so by most people.

All-in-all I highly recommend his work. Although originally published 2004 in Hebrew, the translation of Lorberbaum’s work makes accessible to English speakers an extremely important and valuable work on the history of Imago Dei, Jewish thought, theology, and role in Jewish thought. Even beyond the primary scope of the book, there are many fine jewels and nuggets to discover for ones own work.

*I’d like to express my gratitude to Cambridge University Press for providing me with a review copy in exchange for my honest opinion.

“Although [Christians] mention the name of Heaven, meaning thereby Jesus of Nazareth, they do not at all events mention a strange deity, and moreover, they mean thereby the Maker of Heaven and Earth too; and despite the fact that they associate the name of Heaven with an alien deity, we do not find that it is forbidden to cause Gentiles to make such an association…” (Christianity In Jewish Terms, 73).

There were strands of 12th century Judaism that accepted Christianity as being, in some sense, orthodox. Commenting on Rabbi Manechem’s stance on Christianity (1300’s), historian Jacob Katz states that Christians “recognize the Godhead” and “believe in God’s existence, His unity, and power, although they misconceive some points according to our belief” (Christianity In Jewish Terms, 74). Katz continues by pointing out that Rabbi Menachem believed Christians should not be included in the category of idolatrous.

Why does this matter? Even if Christianity and Judaism are unable to completely reconcile beliefs and the differences in beliefs, it is clear that they are not distinct to point of complete separation. Acknowledgement of this closeness is essential because, although Rabbinic Judaism is quite different from 1st century Judaism, Judaism does help to illuminate Jesus’ works in the Gospels and the words of the epistles. This reconciliation towards peace between Christians and Jews also allows both groups to complete what they are called to do: work for the healing of the world.