Robert M. Royalty Jr. The Origin of Heresy: A History of Discourse in 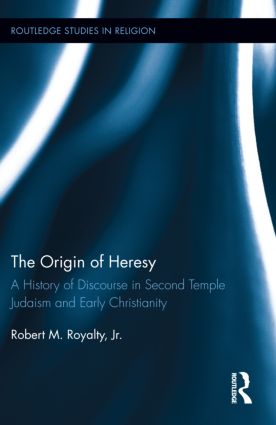 *I’d like to express my gratitude to Routledge for providing a review copy in exchange for my honest opinion.

The Origin of Heresy by Robert M. Royalty Jr. explores the discursive rhetoric of difference in the Second Temple Judaism and early orthodox Christianity in order to draw out the heresiological patterns which became the norm in later “orthodox” Christianity. Importantly he approaches the emergence of Christianity not from the classic tenet of Christian historiography, namely “that unity and doctrinal purity preceded divisions, that truth precedes error” (10); rather, he presupposes many early Christianities in agreement with the Bauer thesis. Christian variety resulted in a project of political hegemony and unity. Along this hope for political hegemony and unity, Royalty draws out how the rhetoric of heresy, discourse which negotiates religious difference, functioned in early communities and eventually developed into Christian identity.

Part I draws out the discursive foundations and developments of heresy through rhetoric of difference from the Hebrew Bible to the most fully formed rhetoric in the Gospel from Matthew’s community. Various sources attest to differing approaches to the rhetoric of difference. Ancient Israelite literature often presents prophetic conflict. More often than not, the response is a push for ideological unity, reconciliation, and restoration, rhetoric responses to difference which early Christianity lacked. Developments in the Dead Sea Scrolls, Daniel, and the Hasmonean conflict represent, for Royalty, a shift into key rhetorical features for early Christianity: doxography of error, dualistic eschatology, excommunication based on doctrine, apocalyptic condemnation of opponents, rejection of alternative view points, and the “True Israel”.

With theses rhetorical features, he examines how rhetoric of difference for John the Baptizer and Jesus functioned politically, illustrating that heresy “was an intrinsic part of the origins of what eventually came to be Christianity” (63). Problematic, though, is his clean distinction between political and religious. Royalty even mentions the discussion of whether or not John’s message was political or religious. Such statement occur consistently throughout the work, assuming a clean division between political and religious. His methodology, though, does not thoroughly explore that distinction by which he analyzes the rhetoric of difference. Brent Nongbri in Before Religion (Yale University Press, 2015) provides a valuable statement on how politics and religion were one in antiquity, in contrast to modern conceptions of religion: “episodes that modern authors have identified as ancint “religion” have turned out to involve discourses that ancient authors themselves seem to have understood primarily in ethnic or civic terms” (63). That said, to label Jesus and John’s rhetoric as “political”, and even later texts by the same token, he does a disservice the cognitive world of the text, a world in which clear distinction between religion and politics was not evident.

Following discussion of Jesus and John, he proceeds to Paul and his rhetoric of difference. Through this analysis, Royalty draws out four significant ways in which Paul contributed to Christian heresiology: homonoai, a Roman political ideology for unity; apocalyptic dualism that negated opponents; value of apostolic tradition and “correct” interpretation; and demonization of opponents. These became fundamentals to Christian heresiology and later discursive moves expand the foundations to appeals to Roman imperialism.

Having explored historical Jesus, Chapter Five examines the Gospels as narratives of exlcusion, drawing also on the Gospel of Thomsas, Q, and the Didaches to trace the rhetoric of conflict. He notes four major rhetorical features: ideology of apocalyptic judgement, dualistic worldview, polemics against opponents with doxography of their beliefs, and contested issues about the identity of Israel. These four elements along with the Gopsel of Thomas demonstrate the wide ideological spectrum in early Christianity.

Part II examines the internal and external political functions of the notion of heresy in Orthodox tradition. First, through traditions in Colossians, the Pastoral Epistles, Revelate, the Johannnine, Ignatius, Polycarp, the Gospel of Mary and the Gopsel of Judas, Royalty explores how early Christianity policed Orthodoxy through political rhetoric of difference. Each of these documents testify “to ideological differences within early Christian communities. These different approaches to difference, however, identity orthodox heresiology as a unique strategy” (146). This ideology is explicitly imperialistic discourse, utilized as orthodox Christianity sought hegemony in the church and people.

As a result of the delay of the parousia, an apologia to Rome, and the ideology of church unity effacing difference, Chapter eight notes the discursive development of heresiology into a form of Christian imperialism, especially notable through Luke-Act’s silence about the diversity of early Christianities. All in all, Royalty’s work demonstrates how early Christianity utilized the rhetoric of heresy as a strategy to dealing with difference and internal and external boundaries. So, rather than approaching early Christianity through the typical lens of orthodoxy, Royalty’s reading offers a new and unique approach to the New Testament, namely one that evaluates “the discursive origins of Christianity and orthodoxy in the political context of competing Christianities in the first and second century” (176).

As a whole there is no doubt that Royalty approaches early Christianity from a unique angle. His analysis is beneficial in that it better illustrates the breadth of early Christianity and later Christianities discursive origins through the rhetoric of difference. Yet the work seems to be too narrow in its use of Second Temple Period literature and the Hebrew Bible. His rhetoric of difference in Israel (Chapter Two) is limited to Jeremiah, a test case in 1 Kings, and Deuteronomy. Discourse about Second Temple Period literature is limited to 4 Ezra, Daniel, the Dead Sea Scrolls, and Maccabees. In order to truly establish the origins of orthodox Christian heresiological traditions, it is necessary to explore more of the breadth of literary resources available, from both the Pseudepigrapha and Hebrew Bible.

Another contention I hold has to do with my critique about the distinction between political and religious. In his discussion about Pharisees and scribes in the Gospel of Matthew, Royalty never touches on the political relationship between the temple leadership and Roman rule. Because the Temple was the center of Jewish worship, it was key to maintaining peace and unity through the Judean province. Royalty only focuses on the religious disagreements between the Pharisees and Jesus. By ignoring the political nature of the Temple leadership and its relationship to Roman leadership, the text, namely the Gospel of Matthew, is misrepresented as being solely about religious disagreement.