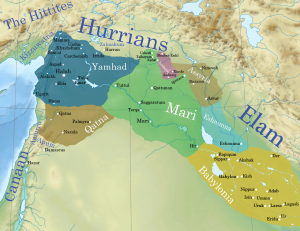 More often than not, understandings of prophecy arise from hearing about or reading the Hebrew Bible. Books like Jeremiah, Ezekiel, Amos, and Isaiah shapes and form these understandings. In this blog post, I will briefly examine one example of prophecy which occurred before all else in the Hebrew Bible. By looking at this text, I hope to demonstrate, through non-biblical material, a function of prophecy in the ancient world. The letter which I will write about was written around the 18th century BCE (c. 1800 BCE) [1].

In this letter, Inibsina is communicating with her brother who she calls Kakkabi (Zimri-Lin) [2]. Within the letter, we first read the following: “Previously, Selebum the Assinu gave a prophecy to me… Now, one female Qammatum of Dagan of Terqa came to me.” Here, Inibsina is telling Kakkabi that she previously received a prophecy. Now, she received another prophecy from a religious priestess. What did this priestess prophecy, then?

“The alliances of the men of Esnunna (a city in the ancient world) are deceptive. And, under the straw, the water will go; and toward the net, of which it can be said I will bind, I will gather it. His city I will destroy, and his stuff, which from ancient times was not defiled, I will defile.”

What is going on here? For the sake of this post, there are two main things which should be addressed: what is the message and who is the speaker?

In this prophecy which was first reported to Inibsina, the message is fairly straightforward: current allies of Kakkabi are deceptive and will not remains faithful to the alliance. As a result, the god Dagan of Terqa will destroy the city of those in the alliance who are deceptive [3]. In other words, the god recognizes the unfaithfulness of some members in the alliance. So, he will destroy them. As for the speaker, it is Dagan of Terqa speaking through the Qammatum priestess.

Likewise, prophecy was intrinsically intertwined into politics. Although popular modern notions of prophecy tend to distinguish it from politics, this ancient letter demonstrates that it was, during this period, understood as part of the political atmosphere. This notion of prophecy for both religious and political ends is important because it may inform how we understand prophecy within the Hebrew Bible. Though I do not advocate that all prophecy in the Hebrew Bible is politically driven, it is worth keeping this reality in mind as we read through prophetic literature in the Hebrew Bible [4].

[2] Martti Nissinen, Prophets and Prophecy in the Ancient Near East, Atlanta: SBL Press, p. 28 n. b. For simplicity, Kakkabi is best understood as a nickname for Zimri-Lin.

[3] My attempt is not a careful and close reading. I simply want to present the gist of the text.

[4] Ancient Israelite prophecy is, in fact, a unique phenomenon.

Nissinen, Martti, Prophets and Prophecy in the Ancient Near East, Atlanta: SBL Press,