*I’d like to express my gratitude to Ugarit-Verlag for providing a review copy in exchange for my honest opinion. 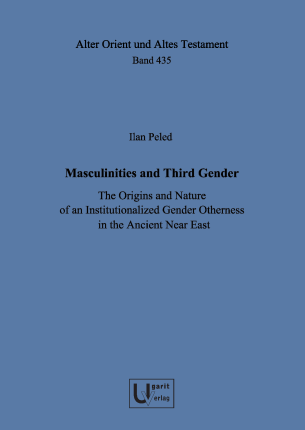 Chapter One briefly examines aeteological Mesopotamian myths in order to (1) illustrate the place of third gender figures within narrative and hymnic texts, and (2) to demonstrate how the figures parallel real life, as further discussed in later chapters. Chapter Two surveys the gala, kalû, and kulu’u, highlighting the gala/kalû as having emerged originally as performers of lamentation, eventually attaining an important role in the king’s court and cultic practice, and the kulu’u primarily as effeminate males. One argument of Peled is of particular importance: the gala/kalû were not always castrated or part of a lower class.

In Chapter Three, Peled examines attestations of assinnu and kurgarrû from a variety of genres. He suggests the close relationship between the two figures, assinnu as feminine and sexual and kurgarrû as masculine and militant, represented the dual character of Ištar. One argument is particularly valuable. After discussing relationship between assinnu and prophecy, Peled notes that “The Mari texts are the only Mesopotamian records to illustrate any relation between third gender figures and prophecy, and even there this relation is slight” and “It seems that their functions were restricted in most cases to cultic performance” (Peled, 2016, pp. 174-175), converging with Ilona Zsolnay’s point that assinnu were “far from being gender-bending prophets who enter mantic states to bond with a loving form of the goddess Ištar”. In contrast, though, he does not consider the assinnu “a special class of warriors” (Zsolnay, 2013, p. 98).

Finally, Peled summarizes and concludes his work, simplifying subordinated masculinities to three categories: cult personnel, palace attendants, and general concepts. For each category, he provides a possible explanation for the origins of that particular third gender categorical figure. These subordinated masculinities, argues Peled, were institutionalized by men of hegemonic masculinity in order to maintain power and define themselves. By utilizing the concept of hegemonic masculinity, Peled suggests that those of subordinated masculinities became the third gender, boundary breaking, non-normative men. Even as boundary breaking figures, they survived as “an integral stratum within the structure of their society… which contributed a great deal to social stability” (Peled, 2016, p. 294).

Through Masculinities and Third Gender, Peled’s interpretations are minimalistic, remaining relatively close to the original text and avoiding unnecessary speculation. The result is a major re-consideration of older works as “limited and circumstantial” (Peled, 2016, p. 136). For example, unless it is clearly present, Peled argues against all third gender figures as being castrated members and of lower status. In this manner his work is extremely valuable, pushing against many tendencies when scholars interpret third gender figures.

On a more critical note, there was something off about his methodology, which he acknowledges. He primarily uses two theories: third gender and hegemonic masculinity. Rather than allowing masculinities subordinated to the hegemonic masculinity to remain masculinities, he pushes these into the third gender category. Third gender as a concept, though, encompasses what is neither male or female. It is a unique category, not necessary for figures on the feminine-masculine spectrum. This lack of clarity regarding his methodological framework in this regard does not take away from the overall analysis and conclusions; however, clarifying his definitions and methodology, especially third gender, would strengthen his overall argument. Likewise, elucidating the connection between third gender and subordinate masculinities would strengthen his overall argument.

In conclusion, I highly recommend this work. In particular, those involved in the history of gender, ancient Near Eastern history, and Biblical Studies may find special significance in Peled’s work. His erudite analysis engages with a range of texts in order to elucidate the origins and role of major gender-ambiguous figures throughout a broad spectrum of ancient Near Eastern history. No doubt this is fundamental legwork to future gender studies in ancient Mesopotamia.