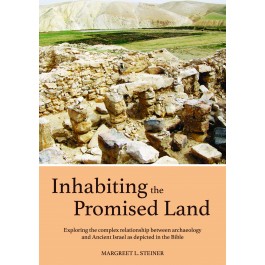 Margreet L. Steiner. Inhabiting the Promised Land: Exploring the Complex Relationship between Archaeology and Ancient Israel as Depicted in the Bible. Philadelphia: Oxbow, 2019.

Inhabiting the Promised Land was originally published in 2015 in Dutch (Op zoek naar… De gecompliceerde relatie tussen archeologie en de Bijbel). Oriented toward the public, the volume aims to characterize the relationship between archaeology and biblical texts in a digestible and understandable way. And as an archaeologist with extensive field experience, Steiner is undoubtedly qualified (click here for Margreet Steiner’s website and CV).

Broadly construed, the book is divided into three sections: introduction; searches for various figures based on biblical chronology; and discussion of the temple in Jerusalem and Asherah. In what follows, I will briefly summarize each chapter. Subsequently, I will reflect on the strengths and weaknesses of the volume.

In Chapter One, Steiner defines key terms (e.g., archaeology, various regions, etc.), compares biblical archaeology with archaeology of the Levant, and outlines primary source materials for the history of Israel (archaeology, inscriptions, and the bible). In doing so, she also describes tradition and redaction criticism in biblical scholarship.

Chapter Two describes biblical stories of Abraham and his descendants, briefly summarizing Canaanites outside of the bible (language, religion, and ethnicity). After juxtaposing Abrahamic and Canaanite traditions, she concludes that Abrahamic traditions cannot confidently be placed into a time period. Subsequently, after describing the exodus account and the lack of non-biblical evidence, she describes the scholarly opinions about sitz im Leben: viewing the biblical texts as reflecting historical reality (maximalists), minimalists, Finkelsteins argument that texts were written in the 7th century BCE as a pious pre-history, and Liverani’s argument for an invented history after exile. Though she doesn’t say it directly, she basically implies that we don’t really know when the Abraham traditions were written, even suggesting that dismissing the patriarchal narratives and the conquest of the promised land as non-historical is “a bit extreme.”

In Chapter Three, she engages the relationship between the bible and archaeology regarding the Saul and the judges, describing various archaeological aspects: Jericho, early Iron Age villages, the Gezer Calendar, and the Merneptah stele. Presented with this information, she describes the four well-known ways about how Israel arose: peaceful infiltration, nomads, revolutions, and mixed multitude.  Though she implies that a mixed multitude is the most reasonable option, she concludes with a simple comment that the “beginning of the biblical Israel is still shrouded in clouds.”

In Chapter Four, Steiner considers the relationship between Goliath and Philistia as represented in biblical texts and archaeology. After broadly outlining Philistines as the Sea People, biblical representations, and archaeology, she describes three phases of Philistine migration based on pottery. Next, she describes Philistine culture via religion and iron use. Moreover, she briefly debunks an inscription that many viewed as evidence for Goliath and, by proxy, David. Thus, Steiner concludes that, while the Philistines migrated from Cyprus and the Aegean to the Levant during the 12th century BCE, they remain shrouded in mystery.

Chapter Five explores David and Solomon outside of biblical texts, discussing the Tel Dan inscription, debated subjects like the stables at Megiddo, the problem of ‘discovering’ King David’s palace in 2005, and Khirbet Qeiyafa. For this period, Steiner makes clear that whereas biblical texts indicate a Golden Age, the stories of David and Solomon appear to be fictive when put into conversation with archaeology.

Chapter Six explores Jezebel and the house of Omri, describing the biblical narrative, various extra-biblical sources, and Omride building projects. After discussing these materials, she highlights that (1) Jezebel is not attested in archaeology and that (2) the House of Omri, especially Ahab, was historically a mighty king, not merely a fictive construction.

Chapter Seven discusses Mesha of Moab, engaging with the Mesha inscription, Moab in the bible, and Moabite religion. She also describes the adventure of how the Moab inscription was discovered and recovered. She concludes that king Mesha—though represented distinctly in biblical texts—did exist as a power competing with Israel.

Chapter Eight turns to Jehoiachin and the exile, examining Neo-Babylonian records, biblical texts, and the Yehuda texts from Babylon. As such, she clearly demonstrates the presence of Judean exiles in Babylon, though admits the picture is somewhat hazy. Subsequently, she provides a brief discussion on how Judean’s seeing a ziggurat in Babylon may have influenced the biblical story about the tower of Babel.

Chapter Nine focuses on Balaam from the Deir Alla plasters in Jordan. After describing the story of discovering the text and the archaeological context, she provides Hoftijizer and Van der Kooij’s translation (1976) and briefly discusses it. She then contrasts the Deir Alla plasters with Balaam in biblical texts. She suggests that editors of the Hebrew Bible knew of Balaam traditions and incorporated them into their narratives.

Chapter Ten shifts to a contentious topic in Levantine archaeology and biblical studies: the goddess Asherah. After describing evidence for Asherah in biblical texts, Astarte, the Queen of Heaven, Kuntillet Ajrud, Khirbet el-Qom, cult stands, and figurines, she concludes that it is not yet clear how or if she was venerated in ancient Israel.

Chapter Eleven concludes with discussion of the temple in Jerusalem, engaging a broad range of data: temples in the Levant and Egypt, a history of the Jerusalem temple and Solomon’s temple according to biblical texts, the ivory pomegranate forgery, Solomon’s temple as a myth, and Herod’s temple. Though unrelated to Solomon’s temple, she subsequently describes various forged inscriptions through stories.

As a volume engaging with the pubic, Steiner’s work is a welcome addition. Covering such a broad range of archaeological data—from Late Bronze age archaeology up to the destruction of Jerusalem—and biblical texts is challenging and admirable, a feat few successfully attempt. In particular, I appreciate how she encourages readers to push against news heralding that archaeology has confirmed the bible. Instead, she encourages readers to acknowledge that the relationship between archaeology and biblical texts is complex. As such, folks should not be too quick to assert that certain archaeological finds support biblical texts.

Regarding her writing style, she writes in a conversational tone. I suspect this may be because it was originally published in Dutch. Presumably, the mood, flow, and tone of the text is culturally inflected. This is, however, a weakness of the volume depending on the reader. Personally, I enjoy German style writing more—sharp, concise, to the point, and not flowery. Her book is not that style. That said, it isn’t a problem so much as personal preference and a note to potential readers.

A few issues are worth addressing. Broadly construed, my criticisms have to do with the degree to which general audiences can interacted with Inhabiting the Promised Land, representation of biblical scholarship, and the books organization.

First, while the book is sometime understandable, she regularly uses language that the average reader does not understand. For example, when discussing the Philistines, she uses technical terms:  for pottery (e.g., monochrome, bichrome, Cypriot pottery, and Mycenaean pottery), Semitic root (most people don’t know what a ‘root’ is), and European Urnfield Culture (I only learned about this recently). Though only a small selection, it suffices to demonstrate that Steiner falls into a trap most academic writer fall into when writing for the public: they forget that while much of their language register is second nature, and the audience has no context or understanding of certain terms and ideas.

Second, Steiner’s volume is disconnected from biblical scholarship. From the outset, she notes that she is not a biblical scholar but an archaeologist of the Levant. As such, her description of the bible and how scholars us it for history is limited, discussing only redaction criticism and tradition criticism. Likewise, in briefly describing the book most relevant for Israel’s history, she only includes the Torah, early prophets (Joshua, Judges, Samuel, and Kings), and the “historical books” (Chronicles, Ezra, and Nehemiah). By excluding a vast portion of biblical texts, she cuts out pertinent literature, such as Jeremiah and Isaiah. In other words, her investigation into the history of ancient Israel and Judah is limited from the outset because she ignores evidence central to reconstructing the history of Israel and Judah.

Similarly, while she defines the goals and questions for Levantine archaeologists, she does not detail the goals and questions of biblical scholars. Undoubtedly, this is a difficult to do due to diversity in the field. Even so, more thorough treatment of biblical scholarly aims would have contributed positively to her overall presentation of the bible and archaeology. It would have also (potentially) impacted some of her conclusions and discussion.

Third, the book’s organization is questionable. Chapters one through eight are arranged by biblical time period; chapters nine through eleven are topical, addressing Balaam, Asherah, and the temple of Jerusalem. The three topical chapters, though, are pertinent for the evidence, archaeological and textual, in chapters one through eight. Moreover, by arranging the chapters by “biblical chronology,” even though she admits that the chronology isn’t always supported by strong archaeological evidence, she does little to provide a new framework to general audiences for thinking about Israelite and Judean history. Had the book been organized as a historical construction of ancient Israel and Judah based primarily on archaeology and then put into conversation with biblical texts, it would have been more helpful by providing a new framework for thinking about history in the region.

Even with these criticism, Margreet Steiner’s Inhabiting the Promised Land is a welcome addition to the small, yet growing, corpus of books related to Levantine archaeology and biblical studies that are written for general audiences. And though the book is imperfect and, in some cases, inaccessible to general audiences, few scholars attempt to engage the public. For this reason, I personally appreciate Steiner’s work and look forward to see how she continues engaging the public.