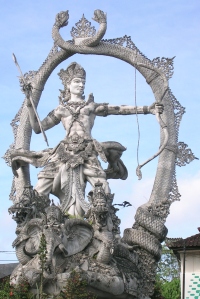 In Biblical Studies, a major issue is the coherency of the text. Apparent contradictions and obscure statements are often understood to point towards an older version of the text. This occurs on a micro and macro level. In other words, it can occur in little portions of text or in entire chapters. In the Mahābhārata, we see a similar issue. The text itself was composed between 500 BCE and 500 CE. Additionally, the text incorporates older Vedic traditions from before 1000 BCE. With such a vast period in which the text could develop, the text as it stands naturally contains obscurities and oddities. It is one of these obscurities which I plan to write about for my quarter paper.

In the first book of the Mahābhārata, there is a scene in which Indra fights against Arjuna and Krsna. In the middle of the narrative, Indra praises Krsna and Arjuna for what they are doing, namely burning a forest. Yet, in the narrative leading up to this moment, Indra and other gods are attempting to stop Arjuna and Krsna from burning the forest. In terms of the narrative sequence, there is no reason for Indra to suddenly praise Krsna and Arjuna. It is this obscurity which I will explore.

I plan on thinking of it in terms of the movement from the older Vedic pantheon into a new(er) pantheon. This is an accepted idea among Indologists. What I want to explore, though, is the nuances in this particular scene. I am interested in drawing out how it contributes to the broader picture within the Mahābhārata of the changing of the heavenly guard and the broader picture of Indian historical development, both political and religious.