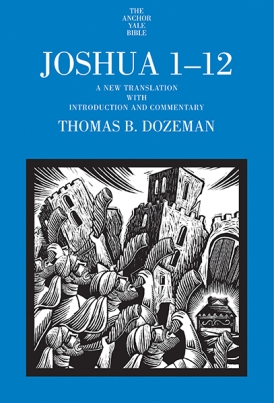 *I’d like to express my gratitude to Yale University Press for providing me with a review copy in exchange for my honest opinion.

In one of the most recent additions to the renowned Anchor Yale Bible Commentary series, Thomas Dozeman (Professor of Old Testament at Union Theological Seminary) explores developments in the study of the book of Joshua and proposes new arguments in order to further our understanding of the book of Joshua. The first volume of the commentary, especially focused on interpreting the theme of religious violence, includes valuable commentary on passages, up-to-date scholarly arguments about interpretive issues, fresh translation comparison of the MT and LXX, and comparison of geographical terms in the MT and LXX.

He operates on the basis that Joshua is a post-exilic, independent book from the Deuteronomistic History, written from a Northern point of view and acquired present literary form late in the development of the Pentateuch and former prophets.[1] On the issue of source priority, he draws from the Vorlage of the LXX, MT, and the Joshua scrolls from Qumran, in agreement with E. Ulrich’s characterization of the “pluriformity” of  textual traditions in Joshua, by arguing that textual expansion operates in multiple directions. This is in contrast to textual critics who assume a linear progression of development within the composition history of the book of Joshua.

The format is, of course, the same as every commentary in the series: (1) Central Themes and Literary Structure, (2) Translation, (3) Notes, (4) Composition, and (5) Comments. Additional to this general layout, Dozeman provides a valuable comparative translation by placing the LXX and MT side-by-side in Appendix I, which should be consulted in any studies. Another valuable tool is Appendix II, which should be consulted for geographical terms as it compares location titles from the Masoretic Text, Codex Alexandrinus, and Codex Vaticanus.

Other major contributions flow and ebb, of course, through the whole work. His sustained focus of herem, geographical terms and locations, and the divine warrior motif surely mark it as an incredibly valuable contribution. His many nuanced conclusions also provide important conclusions for future research and scholarship. Without a doubt, Dozeman’s commentary is a must for any research relating to Joshua.

Overall, I only had one major contention that would significantly affect interpretation of portions of Joshua 1-12. He notes in the introduction that the Pentateuch, being composed in the exilic or post-exilic period, functioned in an authoritative manner as the Torah of Moses (28). While this is true to a certain extent, he fails to clarify what “authority” signified in a post-exilic context. This is something Michael Satlow explores well in How the Bible Became Holy. Dozeman’s lack of clarification on this point results in a later statement in the commentary that the Torah of Moses was authoritative for Diaspora Jews and that it played “the central role of a Torah-based religion”, which is “underscored in the divine demand that Joshua mediate on the Torah” (217). Without a doubt, his focus on the centrality and authority of Torah is true, but to what extent? Clarification of this issue would significantly improve the value of his commentary by exploring the historical nuances of what “authority” actually represented in the post-exilic period and early reception and pluriformity of Joshua 1-12. It would also assist in interpreting what the author is implying by pushing for Joshua to mediate on the Torah and his choice to include the ceremony in which the Torah is written and read. With regard to inner-biblical exegesis, a major tool of the author, it would clarify what the author thinks about Joshua’s relationship to Deuteronomy. Moreover, it would reflect what the author, within his post-exilic context, thought about how people should relate to the Torah.

In conclusion, Dozeman’s commentary on Joshua 1-12 is a necessity for libraries, students, and scholars working with Joshua. While the price is steep, $100.00 through Yale University Press, its contribution to biblical studies is invaluable. Through the commentary, Dozeman’s nuanced arguments are compelling and essential for developing a better understanding of how the book of Joshua functions as literature and how it functioned historically. While he does need to clarify what he means by the Torah being “authoritative”, this does not take away significantly from his sustained focuses on herem, ruralism, anti-monarchism, and composition history. Without a doubt, Dozeman’s commentary is valuable to libraries. For lower and upper-division undergraduate students, it is an excellent option as a secondary source. For graduate student, the bibliography and discussion provides incredibly important resources for moving forward into more nuanced arguments about Joshua. All-in-all, Dozeman’s commentary and translation of Joshua 1-12 is fantastic.

[1] Edit: In response to some confusion about how Joshua was post exilic and written from a Northern point of views, Dozeman’s words explain this: “The literary themes of Joshua and its dependence on a form of the Pentateuch suggest its composition in the postexilic period; it represents a myth of origin, in which the promised land is heavily populated with kings and royals city-states requiring holy war to empty the land of its urban culture, as the ark processes to its northern cultic site near Shechem… The origin story in Joshua contrasts with the competing myth of the empty land in Ezra and Nehemiah, where the promised land has lain fallows during the exile with the absence of cities so that the returning exiled Judaeans had to rebuild the temple and reestablish the lost city of Jerusalem. The rebuilding of Jerusalem in Ezra/Nehemiah represents a response of assimilation to the rule of the Persians… In the book of Joshua, there are no benevolent rulers or royal city-states in the promised land. All are condemned by Yahweh and thus require extermination under the ban” (31). He follows that with some brief notes on later revisions into its present narrative context.