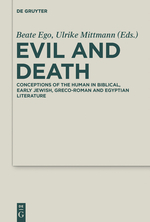 *I’d like to express my gratitude to de Gruyter for providing me with a review copy in exchange for my honest opinion. Additionally, I should note that I did not realize half of the contributions were written in German until I received this book. That said, I will only review the English contributions for the time being. After mastering reading in German next summer, I will complete the review.

Patricia Kirkpatrick (McGill University) examines how Mrs. Job expresses the narrator’s judgement by challenging Job’s rigid covenant framework of retributive justice. While this article does well at proposing an alternative understanding of Job’s wife, greater interaction with the rhetorical discourse of the text itself and how it is reflected in later reception would have strengthened her argument.

Christoph Berner examines dynamics between death, evil, humans, and God in Qohelet and how it provides a foundation for the reworked book of Qohelet. Overall, I thoroughly enjoyed this contribution. More specifically, the manner in which compares Qohelet’s anthropology to the Priestly creation account does well in illuminating what is unique about its anthropology.

Gerbern S. Oegema (McGill University) explores the variety of ethics in early Judaism, illuminating the divergent ideas and consistent ideas, in order to demonstrate the ethic foundation sof early Judaism. While this contribution is intriguing for contributing to the anthropological diversity in early Judaism, there is nothing particularly programmatic or innovative.

David A. deSilva (Ashland Theological Seminary) investigates the author’s interaction with theodicy in 4 Maccabees, drawing out how human nature (menschenbild), Torah, evil, death, and eschatology intersect to form a cogent image of how the author of 4 Macc. deals with evil in the human experience.

Ian H. Henderson (McGill University) considers how children in Mark reflect the author’s anthropology about humanity: “objective powerlessness, desperate vulnerability to death and the demonic, profound dependence on God” (216). This complexity partnered with the role of parents in Mark bolsters and prepares Jesus’ audience for the coming of the Son of Man.

Rouven Genz (Theologisches Studienhaus) illuminating the account of Lazarus and the poor man through a contextualized reading, in which he draws out the particularities of the Lukan use of the motif, and a theological reading of Lazarus as fate without Jesus. His argument is intriuging because, through contextualization of the Lukan motif, he is able to draw out what is unique in Lukan reception and connect it to the anthropology of Luke via theology.

Ellen Bradshaw Aitken attempts to answer what constitutes humanity in Hebrews. Unfortunately, the article is quite unclear and difficult to follow.

Finally, Marlis Arnhold (Rheinische Friedrich-Wilhelms-Universität Bonn) examines representation as evil and death in the myth of Meleager through textual (Homer, Bachylides, and Ovid) and visual (Sarcophagi) sources. She does well in drawing out how different receptions of the myth interacted with the extent to which the human, or the deity, was responsible evil and death within the tale. Consequenly, she presents a cogent image of anthropological views throught he reception of a single myth.

At least from the English contributions, this volume is important. With the exception of Aitken’s article, it provides several unique and innovative approaches to various areas of antiquity through an anthropologically focused approach. The volume isn’t necessarily the sort of thing perfect for an individuals bookshelf; however, it is an excellent addition to any library or reference shelf.