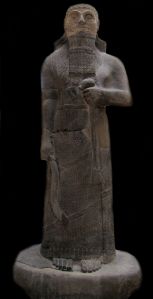 Shalmaneser III’s prayer to Mulissu provides insight as to how Mesopotamian kings functioned in the cosmos, especially their relationship to deities [1]. By function, I don’t simply mean how they ruled; rather, I mean how they fit into the world- and theological- view of ancient Mesopotamia more broadly.

This text may be summarized succinctly: the speaker requests Mulissu’s blessings for the king because he supports the deity’s particular temple [2]. Within this text, three aspect of the king’s role in the Mesopotamian worldview emerge: (a) his role in temple rites and rituals and (b) his role in maintaining the temple, (c) both of which point to his role to do the will of deities.

First, the king is portrayed as participating in rituals and rites within this text:

In the first two lines, the king is said to make and maintain the offerings. His offerings, though, consist of more than a small donations or tax deductions; rather, he provides a large portion of offerings which allow a temple to function. That’s not to say that the king was the only person to provide offerings; rather, he was just a primary contributor.

From a theological perspective, he is one of the primary figures who pleases and appeases deities. Without the king’s support in temple, deities would, perhaps, not be appeased, perhaps choosing to abandon the king and his people! [3]

Returning to the text cited earlier, consider, as well, the speakers’ claim to partake in rituals and perform in rites. For example, in Neo-Assyria, the king participated in a festival at the Temple of Assur. The festival consisted of roughly 1 week of various animal sacrifices, rituals, and libations [4].

Second, and in a similar vein, the king claims responsibility for maintaining the quality and beauty of the temple. Consider a central aspect of the text, namely the speakers’ repairing the cultic hard: “The great harp that played (?) your songs of praise (?) having deteriorated, / … He made it once again splendid and greater than it was [before]” (lines 17, 20). Evidently, the king repaired, or replaced, broken cultic items. Likewise, the king was known to provide finances for building or repairing entire temples. [5]

His role in maintaining cult materials and buildings, generally speaking, provided justification for the deity to bless the king. In other words, from the royal perspective, the king was not legitimated by the divinities for no reason; rather, he functioned within a reciprocal relationship: so long as the king provided the proper sacrifices, housing, and cultic materials for the deity, the deity lent support to the king.

Finally, and ultimately, these two roles of the king point toward the king as the most central performer of the will of deities. In fact, the relationship between the king and the deity was the most central aspect of Assyrian imperial ideology. Shawn Zelig Aster comments that the “king embodies the will of Assur, and acts as his vicar…, and as his priest…” [6]. Such embodiment was made possible because Assur, the highest deity in the Assyrian pantheon, was perceived as the hypostasis of ideal Assyrian kingship. Therefore, one was a “good” Assyrian king not because a deity said a king was legitimate; rather, one was a “good” Assyrian king because they performed (embodied) the will of the deity [7].

To summarize, Shalmaneser III’s prayer to Mulissu demonstrates how the king related to the Mesopotamian worldview, albeit through poetic means. The two majors ways, namely being involved in temple ritual and maintaining the temple through contributions, both points to a more important aspect: the king embodied the will of the deity. Therefore, whenever a text present the king as embodying the will of the deity, it is, at base, expressing why the king is a legitimate king.

[1] Before commenting on this prayer, a few caveats are necessary. First, it is unclear if Shalmaneser III is addressing the deity, or another Assyrian king. Second, it is unclear exactly which deity is being addressed. Unfortunately, I was unable to access the resources which would have enabled me to discuss these problems. Furthermore, all translations of the text are taken from Benjamin R. Foster, Before the Muses: An Anthology of Akkadian Literature, Third Edition (Bethesda: CDL Press, 2005).

[3] That’s not to suggest that a temple could not function without the king. Karen Radner, , “Assur’s “Second Temple Period”: The Restoration of the Cult of Assur, c. 538 BCE,” in Herrschaftslegitimation in vorderorientalischen Reichen der Eisenzeit, eds. Christoph Levin and Reinhard Muller (Tubingen: Mohr Siebeck, 2017), pp. 77-96, demonstrates how one of the primary temples at Assur was rebuilt c. 538 BCE. And although it was traditionally connected to the Assyrian king, it was revived in 538 BCE after the end of Assyrian kingship. Concerning Neo-Babylonia, G. van Driel, Elusive Sulver (Leiden: Nederlands Instituut voor her Nabije Oosten, 2002), pg. 80, suggests a similar idea: While the king played a prominent role in providing means to maintain the cult, major building operations, and agriculture, “we cannot regard the king as the unrestricted owner the temple” (147).